9 Facial Details That Can Reveal Your True Personality, Even If You Try to Hide It

Beauty and intelligence are unrelated. But some people can unknowingly be influenced by the “halo effect,” a bias that lends good-looking people positive traits, like being smarter or more agreeable. However, appearance does have any meaning in terms of personality — it’s all in the face, morphologically speaking. 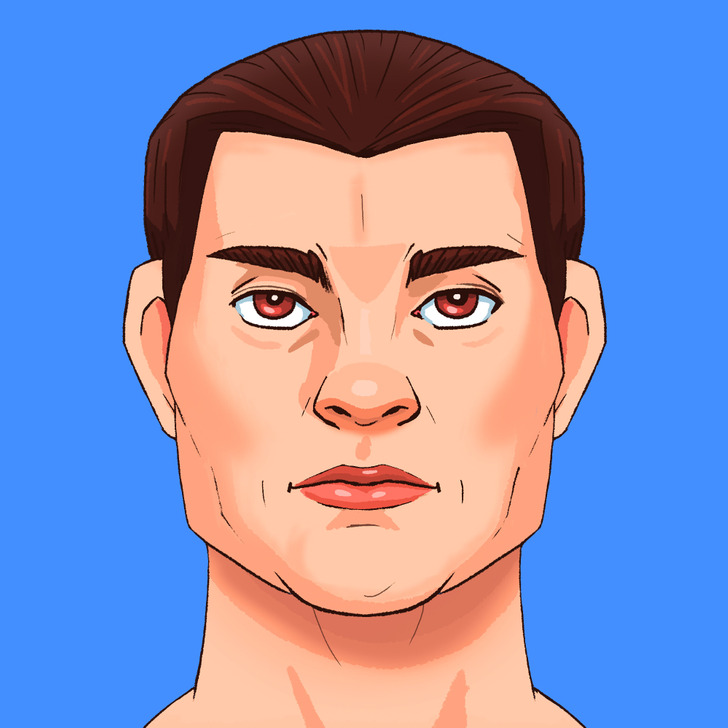 Testosterone and estrogen have a say both in behavior and in how our faces look. High testosterone is linked to stronger jawbones, and high estrogen to smoother foreheads, lusher lips, and softer, rounder contours. In women, these traits are generally associated with higher ratings of femininity, attractiveness, and health, and they reveal higher fertility.

Wider cheekbones are also linked to extra testosterone. This is considered an indicator of higher aggression and also of generosity. Men with this face trait are viewed as more confident, and they feel that way themselves. 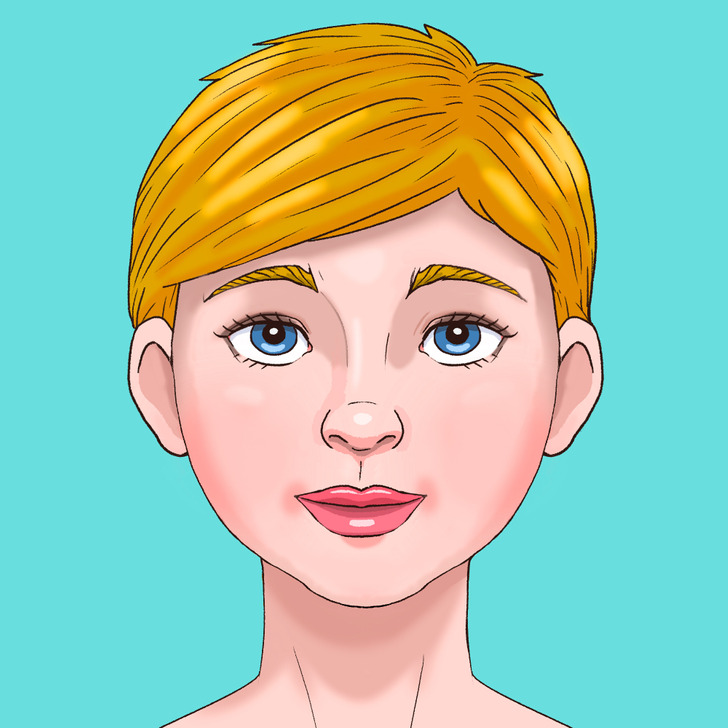 Women with round faces are more generous. A round-shaped face is often a sign of a kind, selfless, and caring person. People with this trait can be true friends. However, they can also give too much of themselves and put other people’s needs before their own, neglecting their well-being.

These face types are perceived to be more innocent and, because of that, more trustworthy. The round shape of a person’s head can also be an indicator of potential problems with sleep apnea. In fact, people with this characteristic might tend to snore more. 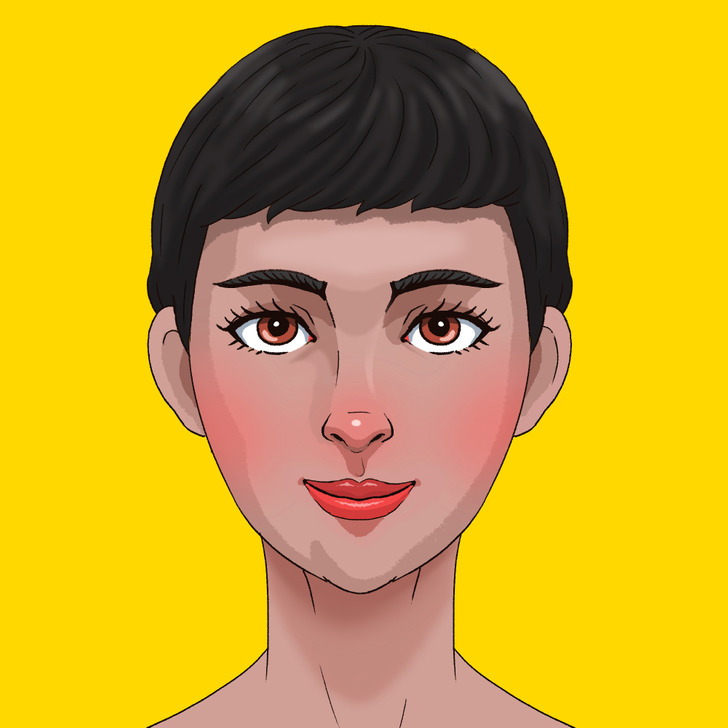 If the face appears long and the cheekbones wider than the jaw, the face shape is oval. People with this face shape are probably perceived by others as more extroverted and friendly. That doesn’t mean people with oval faces are naturally social butterflies. But they tend to be more outgoing and find ease with words, knowing how to use them to make others feel welcome and comfortable. 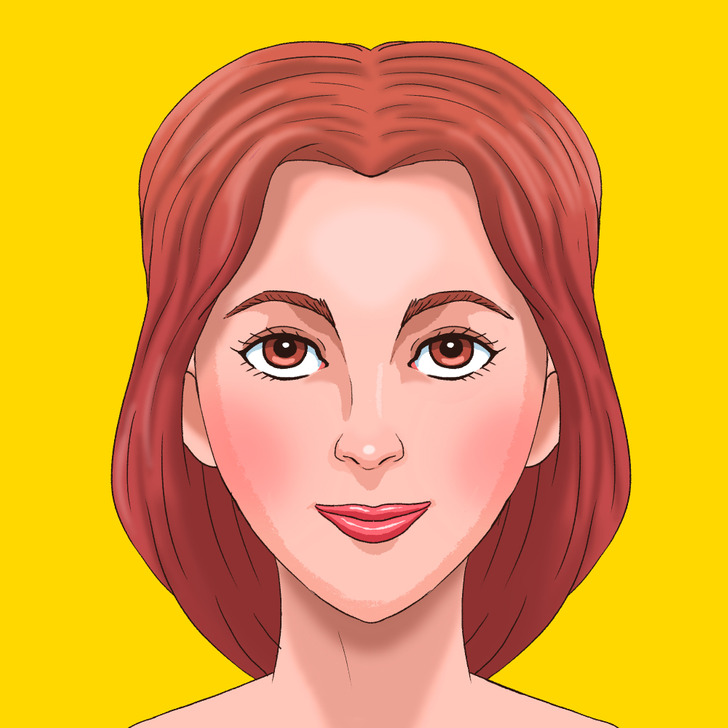 A heart-shaped face is characterized by a large forehead and a smaller chin, like an inverted triangle. They are said to be self-analyzers and strong-minded. People with this face shape tend to have incredible inner strength and are quite stubborn. They have a lot of energy, inner power, and strong intuition, knowing when to act to push for their objectives.

They’re also very creative and affectionate but can also be emotionally volatile and indecisive. People with this face shape can be very warm and easily make other people feel special, as they love to express themselves outwardly. They love the infatuation that comes with falling in love but might not stick around when things settle or get more mundane. 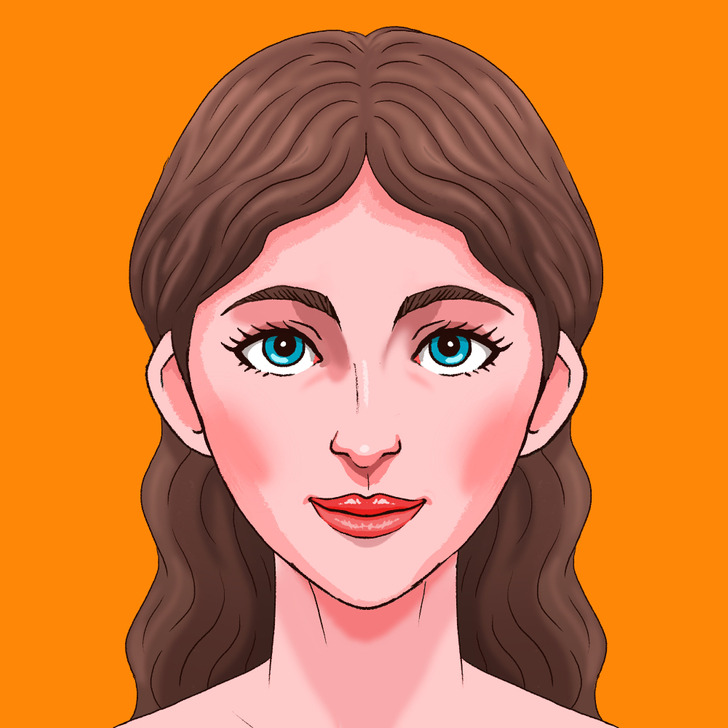 This face type is wider in the middle and pointed toward the forehead and chin. People with this face shape are saind to enjoy being in control. Wanting and aiming for perfection, they are detail-orientedand produce quality work. Sharp like diamonds and very precise with words, they can cut if crossed the wrong way.

In many places, this face shape is considered average in appearance. This can be a good thing, as people, in general, tend to consider average-looking faces more trustworthy than those with special or unique features. 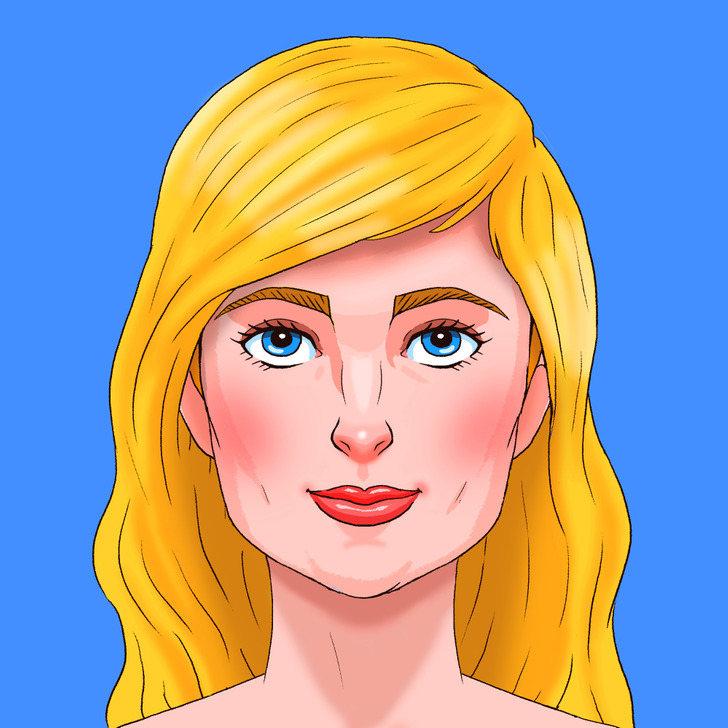 This face shape is characterized by a wide hairline and jawline. People with a wider face type have a lot of natural energy and high stamina. They also tend to take on big projects and have a strong wit and analytical mind. Capable of remaining calm and focused, even in high-stress environments, they can be natural-born leaders.

Good thinkers and planners, they are prone to stick to logic and not talk about their feelings. Men with this face shape tend to feel “more powerful” but are actually perceived as “less trustworthy.” 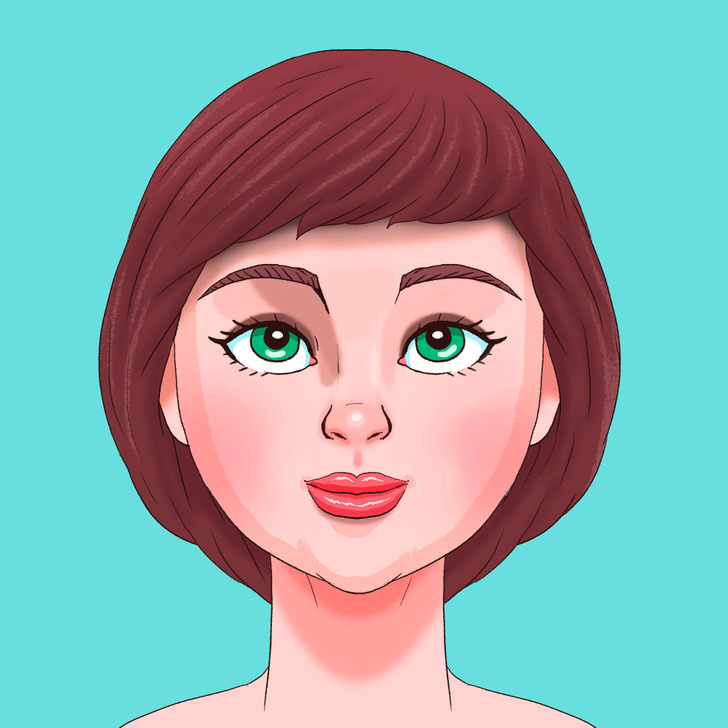 The “baby face” features can be confused with the round face, but here it includes specific details, such as large eyes and a small nose and chin. People with these traits can be perceived as more naive, less dominant, or even submissive. But they are, in fact, honest, warm, and kind. Women with these traits, in diverse cultures all around the globe, are considered the most attractive type of all.

In general, baby-faced men tend to be better educated and more assertive and are more prone to be hostile. This is considered to be a tendency to overcompensate — so much so that they are also more likely to be criminals. Just think of Al Capone or gangster George Nelson (also known as “Baby Face Nelson”). 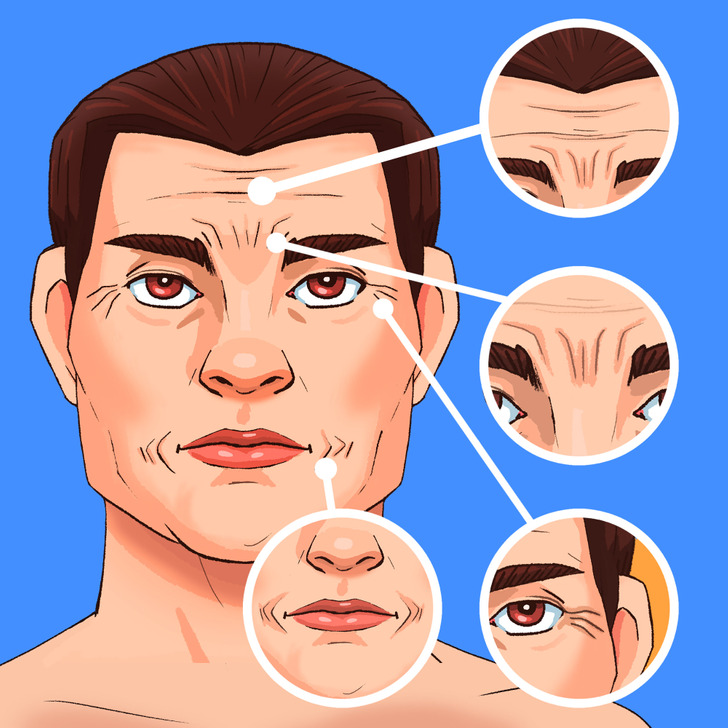 The lines  in the face can also say a lot. People who have a strong and defined solar line in the center of the forehead have high vitality and tend to be ambitious as well as adventurous. “Crow’s feet,” lines in the corners of the eyes, are a joyful signal. However, if they’re too deep, they can be related to tension or difficult decision-making. In general, they signify attention to detail.

The glabellar lines, or “frown lines” can allude to either stubbornness or stress, as they are reinforced by contraction as a negative reaction. And the laugh lines around the mouth can say something about health and life force. Often, they represent optimism and someone who people enjoy being around. 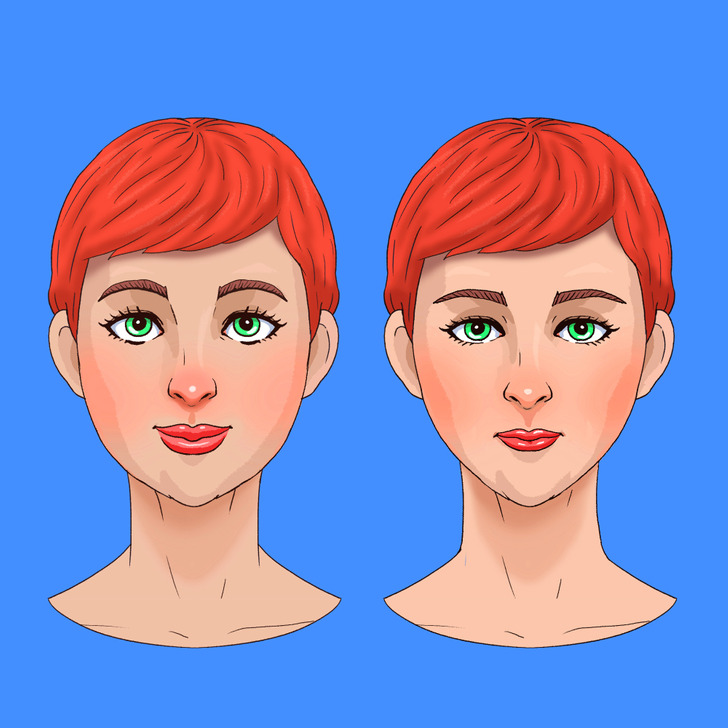 In men, being agreeable and conscientious were also connected to facial characteristics. Higher agreeability was depicted in higher eyebrows, looking “lifted up,” along with widely opened eyes and longer laterally extended eyebrows. Lower levels of agreeableness were associated with the opposite, with the jaw and eyebrows appearing somewhat sunken, along with a “withdrawing” upper lip and visible tension around the mouth and jaw.

In fact, introverted traits reveal the exact reverse pattern of extroverted ones, with the nose area even appearing to press against the face, along with a recessive chin type. You can find more on noses here. 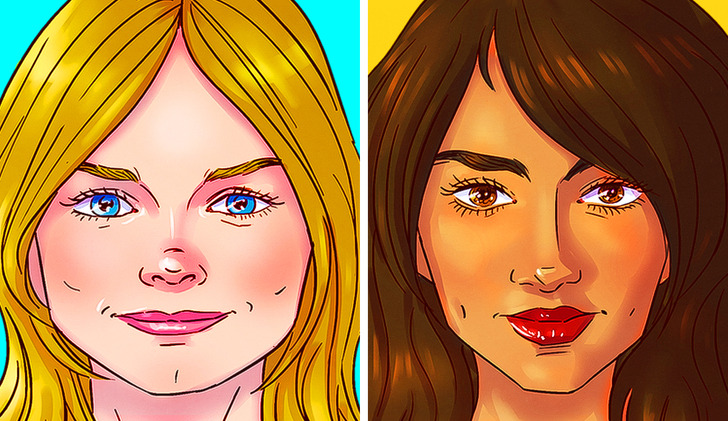 In women, extraversion was found to have a correlation with facial structures that show a protruding nose and lips, along with masseter muscles (the jaw muscles used in chewing) that are well defined. And regardless of gender, masculine faces with distinct jawbones are, in general, considered dominant, just as large foreheads and prominent noses are read as competent traits.